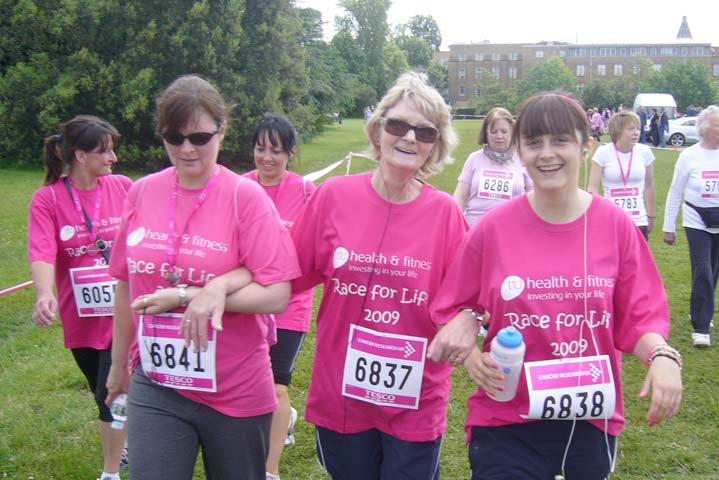 tfd member Myra Salt lives with a condition called Ataxia.  The condition means that Myra lacks muscle coordination, which affects her speech, eye movements, walking, balance and more.  When Myra joined tfd to defy the medics prognosis that she would be wheelchair bound and unable to do many normal everyday tasks.   Her determination to remain independent and as fit as she can be is truly remarkable.  In 2008 Myra, aged 63, asked Lisa the owner of tfd, if she would help her train to walk the Cancer Research 5km Race for Life in June 2009.

For Myra this would be a milestone that she was told she would never be able to reach.  This only made her more determined of course.  Walking was tough and falls would often set her back but would never stop her from literally picking herself up and getting on with it.

The lack of muscle control and coordination made it challenging for Myra to walk outside on uneven surfaces so we knew we needed to get her outside and prepared for what she may face in Oxford.  The walks got longer and faster but we always knew the limits and only pushed on a little at a time.  The goal was to complete the 5km not win it!

After months of training working on Myra’s balance, strength and endurance she set off as planned on a beautiful sunny day in the middle of the Oxford University Parks with over 5000 other people to complete the course.  Myra’s daughter in law, granddaughter and Lisa were all by her side but were under strict instructions not to help her or hold her up at any stage of the walk.  At one point, Myra rested on a park seat for about a minute then got up and said “let’s finish what we started”, so we did exactly that.  We were the last ones through the inflatable finish line and the crowds were cheering Myra on. She crossed the line with her daughter Diane and granddaughter Sammy right by her side.

An amazing lady with such determination.  Today, aged 71, Myra continues to attend the gym three times a week for her regular routine and a 1:1 balance training session with tfd instructor, Sean.  Although now using a walker to keep her safe from falls she still shows the same determination and will to keep going.  She say’s “I don’t like the look of the alternative and I want to be independent as long as possible.  Many other people are worse off than me, I’m just doing what I have to do”.